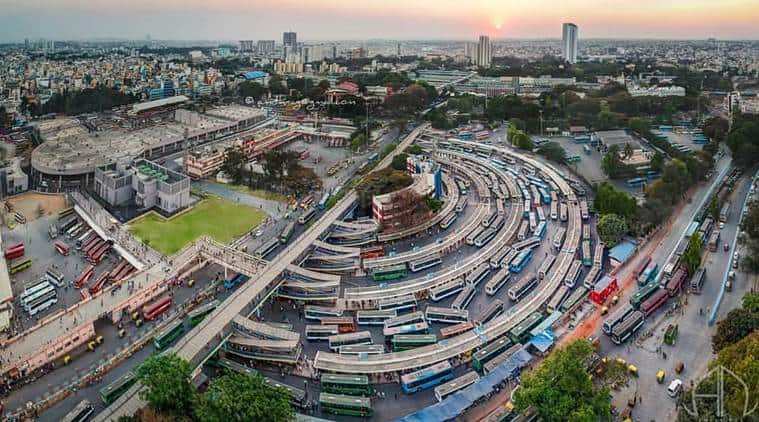 The former chief minister of Karnataka R. Gundy Rao is credited with building the station. The bus station not only eased congestion with buses and helped streamline the transport system but also helped the local area grow economically and was an important landmark for the city for a  number of years.

The semi-circular city bus terminal was built in the 1980s. The station is located on the site of Dharmambudhi Lake. which dried up in the early 20th century.

One of Bengaluru’s most recognizable landmarks and nerve center of the transport system, Karnataka State Road Transport Corporation’s (KSRTC) Majestic bus stand turned 50 in June 2021. You can hear the name of Majestic Bus Station, in but stops and signals, uttered on the lips of a newcomer, anxious to find their place in the city.

They join the millions of people who came in the last few decades would walk the erstwhile wetland, which connected the city of Bengaluru to the railway station. It has largely been forgotten that the Majestic Bus Station was built on a lake named Dharamanbhudi. The lake was functional until the 1950s when there was an increase in demand for water in nearby fields and townships.

The lack of measures to rejuvenate and refill the lake reduces the area into a wetland and later into a large ground, through which people could either go to the city or the station. Initially, this connecting path was just a mud road but later was covered with concrete. Meanwhile, the area became a major locality in the late 1960s, not only because this place connected the city to the train station, but also because of its evolution as a cultural hub. This place also remarks performative arts such as fairs, theatre, circus shows and exhibitions would take place here. This place also became the go-to place for public gatherings and other meetings.

The first Prime Minister of India, Pandit Jawaharlal Nehru addressed a gathering on the lake bed as early as 1931. Naturally, buses started serving the area. According to Jogi, the buses would stand on the boundary of the place. Once it was determined that the lake could not hold water anymore then it was converted into a full-fledged bus stand in the 1960s.

Which is the Karnataka biggest bus stand?

KSRTC was given 1, 36, 294 square yards of land to Dharmambudhi tank in 1963 to build a bus stand. Although, the semi-circular bus terminal that we see today was built in the 1980s by then Chief Minister of Karnataka, R Gudu Rao.

Majestic Bus Station helped ease the traffic congestion of the growing city and also contributed to the economic growth of the area and the state. Although, the bus station was never officially called Majestic.

The name is from this area because of a movie theatre by the name built in the 1920s. It survived till the later decades of the century, only to be demolished to make way for the commercial complexes that we see today. At one point in the 1970s, the area has almost 14 single screens there’s and this is the area where Bangalurena watched their first film, be it English or any other language including Bengali. Bengaluru was a cosmopolitan city even then.

The Majestic area in Bengaluru has more than 500 years of history. Since it was close to a water body, there were a number of religious institutions and temples. Even then, the area was about community and people coming together, be it for public shoes, gatherings, cinema and now as a connecting hub. It is not astonishing then that Majestic will always be an anchor that keeps on reminding the city about who we are and where we come from and it does not matter where we end up going.

Although, the Karnataka States Road Transport Corporation (KRSTC) has decided to relocate the Bus Stand to Majestic Central Bus stand again. The passengers were findings it tough to go to Majestic Bus Stand or to the Bengaluru City Railway Station (Krantivira Sandoli Rayanna Bengaluru Station) from the Mysuru Road Satellite Bus Station as they had to catch various modes of transport.

But this problem is likely to be resolved soon as the Karnataka States Road Transport Corporation (KRSTC) has decided to operate bises towards Kerala, Tamil Madu, Mysuru, Madikeri and Kodagu from Majestic Bus Station itself. The luxury buses such as Volvo, Sleeper and other buses towards Mysuru and inter-State buses will start operating from Majestic Bus Stand itself. This decision was taken in November 2018.

Bus timings from Bengaluru Railway Station to Majestic Bus Stand is around 2 minutes when your bus maintains an average speed of 60 km per hour over the course of your journey. The estimated travel time from Bengaluru Railway Station to Majestic Bus Station by bus may vary or it will more time than the above-mentioned time because of the road conditions and various travel routes.

Best things to see and do at Majestic Bus  Station

Falcon Coins is an Archaeological Survey of India Licensed Old Coins shop where coins of Hoysala, Mahjanpadas, Vijaynagara, Mughal, Satavahans and many more dynasties coins are found, The shop is located in the heart of the city right opposite Majestic Bus Station. You must visit this shop and experience the world as the shop has got so many products of interest to all age groups.

Just right on platform number 1 is a heritage gallery that displays the growth and development of railways in the part of the country. The entry is free here. Interesting inhibits such as different lamps, weighing machines, station master’s bell and travelers’ chairs, etc. Outside the station, a steam locomotive from Parlkahemedi light railways can be seen in its full glory with semaphore signals from a bygone era.

Located opposite the Majestic Bus Stand, this place is most likely to escape your line of sight if you are just walking around. You can either Google Map it or look out for a big red board outside the Aparna Theatre and Shopping Complex, then you will be welcomed by a whiteboard showing the specials of the day and the lunch crowd.

They serve on banana leaves and there are not many as such, so you have to listen to the waiter rap to the menu.  You say skip that and order a plate of either chicken or mutton biryani along with a plate of chicken kebabs. If you like soup then you can order the paya soup. A meal for one would cost you under Rs 400.

This is the best military hotel in town and there is no way that you can skip this century-old establishment. This place is known for serving food of patris and eco-friendly plates using stitched dried leaves so you can just hit this place for delicious and healthy breakfast, lunch and dinner. If it is breakfast that you are going for then you have to be sure to order idlis with kheema curry.

But if it is lunchtime then it is either the Mutton or Chicken Pulao. But let me tell you that all the fried dishes are strong on the chili or pepper factor. So I recommend you a soft drink for a meal for one that cost under Rs 300.

This is one of the fanciest with its very Nagarjuna-style seating space and you will find a table to sit at even during rush hours. So it is possible that you might have to share your table with an unknown biryani lover. At this place, food is served on banana leaves.